Actually not so much woo-hoo. Since everyone got made redundant in the summer there's not a lot of us left to party with. There's every chance the dance floor this afternoon will look like this. 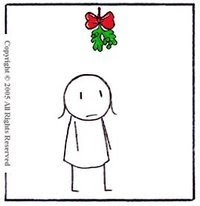 You can hang around under the mistletoe for as long as you want, there's no-one here to snog.

Still it can't be as bad as last year's party, which took place when the redundancies were first announced. Happy Party they called it. It wasn't. There were women crying in the chill-out corner, the dance floor was constructed of broken desk-tops (not that anyone felt like dancing), a fat bloke went round yelling at everyone, and for some reason we were given plasticene to play with. Therapy probably. Most of the plasticene ended up being modelled into genitals, with varying degrees of talent and success.

Sigh. Let's hark back to happier times. Only two years ago we had so many colleagues we could have a real party, with tinsel and music and party dresses, and people danced so hard their bosoms fell out.