After an absence of a couple of months, I have finally returned to my Pennine Adventure. On Saturday, I picked up where I left off back in April and continued my journey North - this time from Greenfield to Littleborough.

The Pennine Way doesn't actually go through Greenfield (but the train does) so I had a walk of nearly four miles to the start of my route. This was the shortest and easiest stretch of Pennine yet, just a short haul up the Standedge Tunnel, then pretty flat all the way. Here's the profile:

From Where's the Path.

I've drawn in that little black cloud to indicate the section of the walk that was through a torrential thunderstorm. It didn't last long, maybe half an hour, but it was half an hour of boiling thunder and unrelenting, pissing rain. Luckily there wasn't any lightning nearby, because at the time I was the only feature in a bleak and soggy landscape.

The blue dip in the middle indicates something I've held an overwhelming ambition for, for a long time. It is the footbridge that crosses the motorway. Everytime we go to an away game in Yorkshire (which is most of them) I gaze up at that bridge and dream about walking across it. And now I have!! 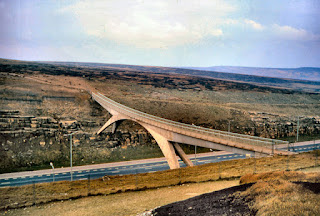 Fortunately it had stopped raining by then so the magic of the moment wasn't in anyway marred.

Some other landmarks of Saturday's walk:
1). I have left the OL1 behind; I am now walking on the OL21. That's progress! 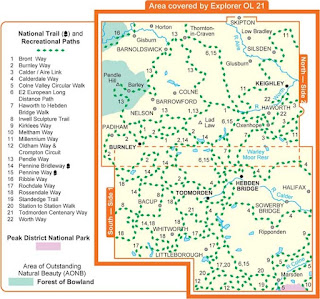 (Ordnance Survey) In case you're not familiar with the area, my route is number 15.

2). At the very start of the Pennine Way, where I set out back in March, there is a pub. For the first time since then, there is a pub right on the route.

When I got there, it was closed.
This is becoming something of a feature of my walks, isn't it?

3). This walk completed the first 1,000 miles I have walked this year.