January. It can be a bit difficult.


Last Wednesday night we were meant to be playing at Ashton United. The pitch looked like this: 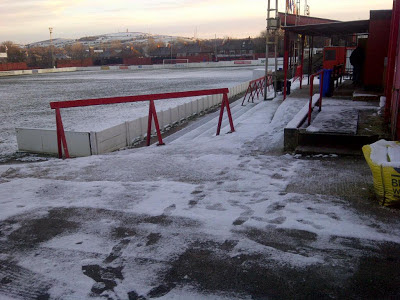 The match was postponed until tonight. 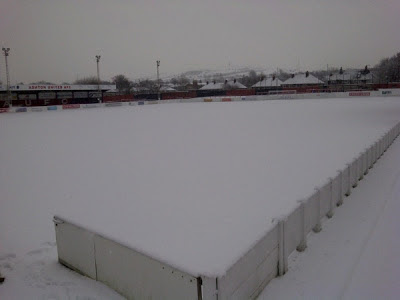 No, in no sense of the word is that an improvement. No football for us tonight. Sigh...

On the other side of Manchester, where we live, the snow has melted and the world is dry and bright again.

Anyway, moving on. I think we are far enough into the New Year to look back on the old one and make resolutions for the new one.

Hare & Houndses visited - 4. This is a pathetic effort by anyone's standards, but I think I can take some comfort that two of the pubs were far away. The other two were very close, in fact one of them is across the road from Ashton United's snow-bedecked and frozen ground (as seen above).

Away Games - 30. This is a new category for 2012. I have included the first team, the youth team and the women's team; league, cup and friendlies in the tally. That's a lot of miles and a lovely amount of football, isn't it? Now I don't feel so sad about tonight.

Actually that should be resolution - I have only made one:
Pen-y-ghent.
When I was doing my Pennine Adventure last year I could see it in the distance, and I've seen it in the distance when travelling to some of those Away Games (above). I have got a hankering!
I haven't worked out the details of my resolution yet (it still is only January, after all) but it will almost certainly involve a bit more Pennine Way. It might also involve a Yorkshire Three Peaks walk, or possibly a Twin Peaks walk (the latter isn't an official thing, it's just me not being arsed to trudge all the way over to Whernside). I might like it so much that I try all three options.

Oh, this is going to be a brilliant year!

Posted by Dishwasher Crab at 13:11