In a strange twist to normal life, this weekend our football was moved to Sunday, which meant Saturday was walking day.

I fancied a walk with a concept, so I set out on a Win/Lose Tour. Starting from Bamford I walked up Win Hill, down in to Hope then up to Lose Hill. 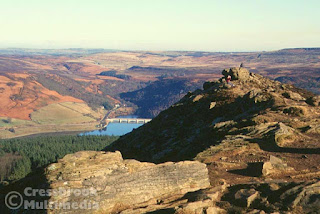 The weather was glorious and the day still young so I continued on to Mam Tor.

This changed the concept of my walk: no longer just Win/Lose, it was now The Hope Valley Three Peaks.

Everywhere has Three Peaks, if you care to look for them.

Of course, you could just walk along the ridge from Lose Hill to Mam Tor, but that isn't really in the spirit of a Three Peak Challenge, in that every peak should be climbed, and you should go up one way and come down another. Much more fun to drop down to Castleton, then head up to the summit via the Broken Road and the Mam Tor Wall of Death. (Actually I don't think that's its real name, it is just what we call it because it was blowing a gale the first time we ever climbed up it.)

Finally, down the dark side of Mam Tor to Edale and time for a quick pint before the train came.

One Sunday, FC were at home to league leaders, North Ferriby. It was a Draw, 1-1.

Posted by Dishwasher Crab at 16:40