Oh, the pubs are coming thick and fast now, aren't they?! 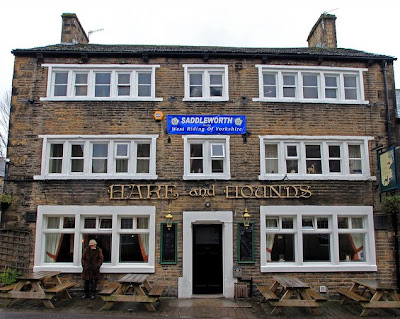 This is the Hare and Hounds in Uppermill.
The photo is from Craig H1's flickr set - more pictures of his Saddleworth Pubs here.

After a long, happy and muddy ramble yesterday I popped in here for a well earned pint.

Many people have a perception that Saddleworth is bleak. Much of this, I think, is rooted in history - some VERY BAD THINGS happened here in the 1960s. And Saddleworth Moor does present a rather forbidding aspect if only ever seen from the motorway.

But if you get off the motorway and get out of your car and go for a walk, it is a lovely area. High craggy hills, green valleys, woods, streams (like this), Yorkshire villages, impressive examples of Victorian engineering (and this) - and some jolly fine little pubs. And all of that only 20 minutes by train from Manchester Victoria.

Speaking of which. Despite what we saw on Corrie on Friday night, and despite Leanne Battersby's best attempts, you cannot catch a train from Victoria to London. Never could, never will. Especially not from that platform - the best she could have managed from there would have been, err, right back to Saddleworth.

So that worked out well, didn't it?

Posted by Dishwasher Crab at 15:53