Top of the League!

This has put us Top of the League! 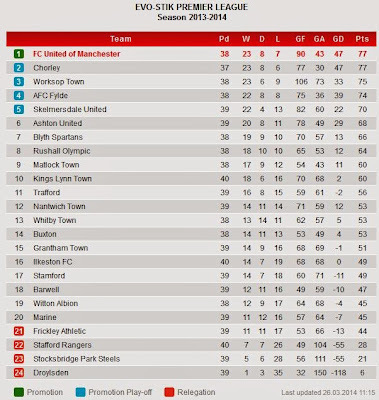 Admittedly, we may only be top for twenty-four hours; Chorley play tonight and could overtake us. But I've always been a big fan of seizing the moment and celebrating whatever I can whenever I can.

Last night was a cracker! Not only did we see some smashing goals, I learned from a mutual friend that Mr Crab's new girlfriend is a Cockney with 8 (that's EIGHT!) children, various fathers.

How confusing for my poor husband. So with her eight, and his own two sons (abandoned by him when they were toddlers) and his ex-wife's two daughters who learned to call him Daddy before he abandoned them too, that's, ummm, let's see ... Oh I've run out of fingers to count them all on!
A lot of children.

I wonder if she's making him watch Eastenders. He always used to hate that programme.

Posted by Dishwasher Crab at 15:07